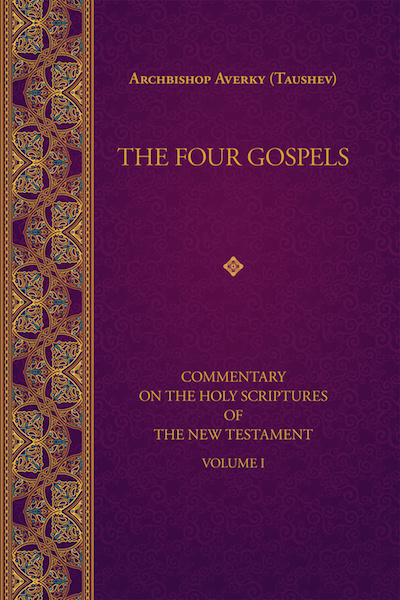 This classic textbook contains sober, patristic explanations of every event in the four Christian Gospels in a harmonized chronology. Based on the teachings and tradition of the Eastern Orthodox Church, this book is the first of its kind.

The work of Archbishop Averky (Taushev) stands apart in an intellectual climate that prizes innovation over tradition, headlines over the Truth, and intellectualism over divine revelation. Writing in the tradition of biblical exegetes such as St John Chrysostom and Blessed Theophylact of Bulgaria, Archbishop Averky provides a commentary that is firmly grounded in the teaching of the Church, manifested in its liturgical hymnography and the works of the Holy Fathers. Analyzing all four Gospels chronologically and simultaneously, he allows the reader to see the life of Christ as an unfolding narrative in accessible, direct language.
Using the best of pre-Revolutionary Russian sources, Archbishop Averky also remained abreast of developments in Western biblical scholarship, engaging with it directly and honestly. He was adamant, however, about the primary importance of Patristic exegesis in understanding the Scriptures. He approaches the Gospels first and foremost not as a literary work of antiquity, but as the revelation of Jesus Christ as God in the flesh.

Archbishop Averky’s commentaries on the New Testament have become standard textbooks in Holy Trinity Orthodox Seminary and have been published in Russia to widespread acclaim. This present volume is the first translation of these texts into English. It will be an indispensable addition to the library of every student of the Gospels.

Archbishop Averky (Taushev, 1906–1976) was the fourth abbot of Holy Trinity Monastery in Jordanville, NY. He was born in Imperial Russia, but had to leave the country with his family in the wake of the Russian Revolution. Living in Bulgaria, he was drawn to the monastic life, and soon became a monk and a priest. He taught and ministered in Bulgaria, Czechoslovakia, Yugoslavia, and Germany, before being assigned in 1951 to teach at the Holy Trinity Seminary. He was consecrated a bishop, and after the death of Archbishop Vitaly (Maximenko) became the abbot of the monastery. As abbot, he was also the rector of Holy Trinity Seminary and was heavily involved in the formation of its curriculum and daily life. He was also praised by converts to the Orthodox faith such as Hieromonk Seraphim (Rose) for being a steadfast defender of traditional Orthodoxy. He wrote many commentaries on scripture and other works which are extensively read both in Russia and in the diaspora.

Nicholas Kotar is a recent graduate of Holy Trinity Seminary and an assistant editor at Holy Trinity Publications in Jordanville, NY. He also has a degree in Russian Literature from UC Berkeley. Having begun conducting with the youth choir in the Holy Virgin Cathedral in San Francisco, Nicholas helped establish the St John of San Francisco Men’s Chorale, which has released two disks to date: Rejoice in Song and Chrysostom. Currently he conducts the monastery and seminary choir at Holy Trinity Monastery in Jordanville, with whom he recently recorded a new album, Cycles and Seasons: Worship at Holy Trinity Monastery. He is also a founding member of Conquering Time, an ensemble of performance, visual, and literary artists inspired by the Inklings that stages original works of storytelling and traditional music and publishes new poetry and prose.

Introduction: The New Testament, the Four Gospels, and a General Explanation

1. The Coming into the World of the Lord Jesus Christ

The Introduction to the Gospel: Its Veracity and Purpose

The Conception of the Forerunner of Christ, John

The Meeting of the Virgin Mary with Elizabeth

The Birth of John the Baptist

The Genealogy of the Lord Jesus Christ According to the Flesh

The Nativity of Christ

2. The Public Ministry of the Lord Jesus Christ: Events of His Life Before the First Passover

John the Baptist and His Witness of the Lord Jesus Christ

The Baptism of the Lord Jesus Christ

The Forty-Day Fast and the Temptation from the Devil

The First Disciples of Christ

The First Miracle at the Wedding in Cana of Galilee

3. The First Passover of the Public Ministry of the Lord Jesus Christ

Casting Out the Merchants from the Temple

The Conversation with Nicodemus

The Healing in Cana of the Son of the Nobleman

The Calling of the Fishermen-Apostles: Peter, Andrew, James, and John

Healing Peter’s Mother-in-Law and Many Others

Jesus Christ Preached in the Synagogue in Nazareth

The Healing of the Leper

The Healing of the Paralytic in Capernaum

The Calling of Matthew

4. The Second Passover of Public Ministry of the Lord Jesus Christ

Healing the Paralytic Near the Pool of Siloam

Tearing Off the Wheat on a Sabbath

Healing the Man with the Withered Arm on a Sabbath

A Great Multitude of People Gathers Around the Lord, His Many Miracles: The Lord Avoids Glory and the Prophecy of His Humility

The Sermon on the Mount

Healing the Servant of the Centurion of Capernaum

The Resurrection of the Son of the Widow of Nain

Rebuking the Sinful Cities, Praising God for Revealing the Truth to Children, and a Call to All Who Are Weary and Heavy Laden

Forgiving the Sinful Woman in the House of Simon the Pharisee

A Woman Praises the Mother of Christ, and Christ Answers Her: Spiritual Relation to the Lord

The Lord’s Parables Regarding the Kingdom of God: The Parable of the Sower

The Lord Answers Those Who Are Hesitant to Follow Him

Calming the Storm on the Sea

Healing the Two Blind Men and the Dumb Demoniac

The Second Visit to Nazareth

Christ Walks Throughout Galilee with His Disciples and Certain Women: His Sorrow at the Lack of Workers for the Harvest

Christ Sends the Twelve to Preach

The Beheading of John the Baptist

The Miraculous Feeding of the Five Thousand with Five Breads

The Lord Walks on Water and Heals Many Sick

Conversation About the Bread from Heaven

5. The Third Passover of the Lord Jesus Christ’s Public Ministry

Rebuking the Tradition of the Pharisees

Healing the Daughter of the Canaanite Woman

Healing the Deaf with a Speech Impediment and Many Other Sick

The Miraculous Feeding of the Four Thousand

Healing the Blind Man in Bethsaida

Apostle Peter Confesses, on Behalf of All the Apostles, that Jesus Christ is the Son of God

The Lord Foretells His Death and Resurrection, and Teaches of the Necessity to Bear One’s Cross

The Transfiguration of Christ

Healing the Possessed Youth: On the Importance of Faith, Prayer, and Fasting

The Miraculous Paying of the Temple Tax

Who Is Greatest in the Kingdom of Heaven? The Lord Uses a Child as an Example to the Disciples

The Teaching Concerning Battling Against the Passions

The Parable of the Lost Sheep, of Correcting Those Who Are Lost, and the Meaning of the Judgment of the Church

On Forgiving Offenses and the Parable of the Merciless Creditor

Christ Goes to Jerusalem with His Disciples: The Samaritan Town Refuses to Take Him In

Christ Sends the Seventy to Preach

The Lord in Jerusalem for the Feast of Booths

Christ’s Judgment over the Woman Caught in Adultery, Brought Before Him by the Pharisees

Christ Speaks with the Jews in the Temple

Healing the Man Blind from Birth

Sermon Regarding the Good Shepherd

The Discussion During the Feast of Purification

The Return of the Seventy

The Parable of the Merciful Samaritan

The Lord Jesus Christ in the Home of Martha and Mary

The Parable of the Insistent Request

Denunciation of the Scribes and Pharisees

The Parable of the Foolish Rich Man

Parables on Awaiting the Second Coming of Christ: Of the Slaves, Who Wait for the Coming of the Lord and of the Good and Faithful Servant

The Lord Predicts Division Among People on Account of His Teaching

A Call to Repentance, Inspired by the Death of the Galileans and Those Who Were Crushed by the Tower of Siloam

The Parable of the Fruitless Fig Tree

Healing the Woman Who Was Bent Over

On the Narrow Path to the Kingdom of God

Healing the Man Sick of the Dropsy

The Parable of Those Who Love to Be First

Parable of Those Called to the Feast

The Teaching Regarding True Followers of Christ

The Parable of the Prodigal Son

The Parable of the Unjust Steward

The Parable of the Rich Man and Lazarus

The Teaching on the Holiness of Marriage and on Virginity

The Parable of the Unrighteous Judge

The Parable of the Publican and the Pharisee

The Apostles, Who Left Everything for Christ’s Sake, Will Inherit Eternal Life

The Parable of the Ten Pounds, or the Talents

The Resurrection of Lazarus

The Decision of the Sanhedrin to Kill the Lord Jesus Christ

The Dinner in Bethany at the Home of Lazarus

6. The Last Days of the Earthly Life of the Lord Jesus Christ

The Entry of the Lord into Jerusalem

Casting Out the Merchants from the Temple

Great Tuesday: The Withered Fig Tree and the Teaching on the Power of Faith

Conversations in the Temple: The Lord Answers the Elders Regarding His Authority

The Parable of the Two Sons

The Parable of the Wicked Husbandmen

The Lord’s Answer Regarding Paying Taxes to Caesar

Shaming the Sadducees with Respect to the Resurrection of the Dead

Accusing the Scribes and Pharisees

The Lord on the Mount of Olives

The Parable of the Ten Virgins

On the Dread Judgment

Great and Holy Wednesday: The Council of the Chief Priests and Elders Regarding the Death of Jesus, Jesus’s Anointing by the Sinful Woman in the House of Simon the Leper, and the Betrayal of Judas

The Prayer in the Garden of Gethsemane

The Betrayal of Jesus Christ and the Flight of the Apostles

Judgment over the Lord by the High Priests Annas and Caiaphas

Great and Holy Friday: The Judgment of the Sanhedrin

The Death of Judas, the Traitor

The Lord Jesus Christ Is Brought to Pilate

The Lord’s Via Dolorosa, the Way to Golgotha

The Repentance of the Good Thief

The Theotokos at the Cross

The Death of Christ

The Burial of the Lord Jesus Christ

7. The Resurrection of Our Lord Jesus Christ

The Myrrh-Bearing Women Come to the Tomb; the Angel Appears to Them

The Risen Lord Appears to Mary Magdalene and the Other Mary

The Appearance of the Risen Lord to the Eleven Apostles on the Eighth Day After the Resurrection, and the Doubt of Thomas

The Ascension of the Lord