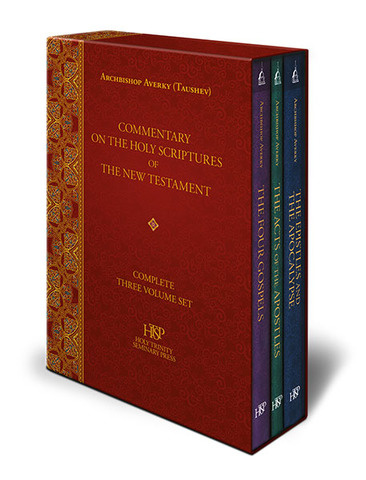 Archbishop Averky approaches the New Testament first and foremost not as a literary work of antiquity, but as the revelation of Jesus Christ as God in the flesh. Writing in the tradition of biblical exegetes, such as St John Chrysostom, Blessed Theophylact of Bulgaria, and St Theophan the Recluse, he provides a commentary that is firmly grounded in the teaching of the Church, manifested in its liturgical hymnography and the works of the Holy Fathers.

Archbishop Averky (Taushev) (1906–1976) was the fourth abbot of Holy Trinity Monastery (Jordanville, NY). He was born in Imperial Russia, but had to leave the country with his family in the wake of the Russian Revolution. Living in Bulgaria, he was drawn to the monastic life, and soon became a monk and a priest. He taught and ministered in Bulgaria, Czechoslovakia, Yugoslavia, and Germany, before being assigned in 1951 to teach at the Holy Trinity Seminary. He was consecrated a bishop, and after the death of Archbishop Vitaly (Maximenko) became the abbot of the monastery. As abbot, he was also the rector of Holy Trinity Seminary and was heavily involved in the formation of its curriculum and daily life. He was also praised by converts to the Orthodox faith such as Hieromonk Seraphim (Rose) for being a steadfast defender of traditional Orthodoxy. He wrote many commentaries on scripture and other works which are extensively read both in Russia and in the diaspora. He is best known in the English-speaking world for his commentary on the Book of Revelations, The Apocalypse in the Teachings of Ancient Christianity

Deacon Nicholas Kotar is a recent graduate of Holy Trinity Seminary and an assistant editor at Holy Trinity Publications in Jordanville, NY. He also has a degree in Russian Literature from UC Berkeley. Having begun conducting with the youth choir in the Holy Virgin Cathedral in San Francisco, Nicholas helped establish the St John of San Francisco Men’s Chorale, which has released two disks to date: Rejoice in Song and Chrysostom. Currently he conducts the monastery and seminary choir at Holy Trinity Monastery in Jordanville. He is also a founding member of Conquering Time, an ensemble of performance, visual, and literary artists inspired by the Inklings that stages original works of storytelling and traditional music and publishes new poetry and prose.