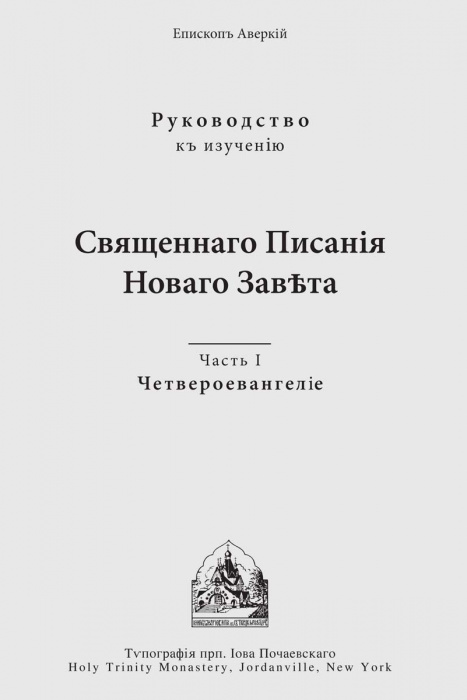 This classic textbook contains sober, patristic explanations of every event in the four Christian Gospels in a harmonized chronology. Based on the teachings and tradition of the Eastern Orthodox Church, this book has become a standard text for study of the New Testament in Holy Trinity Seminary.

The work of Archbishop Averky (Taushev) stands apart in an intellectual climate that prizes innovation over tradition, headlines over the Truth, and intellectualism over divine revelation. Writing in the tradition of biblical exegetes such as St John Chrysostom and Blessed Theophylact of Bulgaria, Archbishop Averky provides a commentary that is firmly grounded in the teaching of the Church, manifested in its liturgical hymnography and the works of the Holy Fathers. Analyzing all four Gospels chronologically and simultaneously, he allows the reader to see the life of Christ as an unfolding narrative in accessible, direct language. Using the best of pre-Revolutionary Russian sources, Archbishop Averky also remained abreast of developments in Western biblical scholarship, engaging with it directly and honestly. He was adamant, however, about the primary importance of Patristic exegesis in understanding the Scriptures. He approaches the Gospels first and foremost not as a literary work of antiquity, but as the revelation of Jesus Christ as God in the flesh.Archbishop Averky’s commentaries on the New Testament have become standard textbooks in Holy Trinity Orthodox Seminary and have been published in Russia to widespread acclaim. They will be an indispensable addition to the library of every student of the Gospels.

Archbishop Averky (Taushev) (1906–1976) was the fourth abbot of Holy Trinity Monastery (Jordanville, NY). He was born in Imperial Russia, but had to leave the country with his family in the wake of the Russian Revolution. Living in Bulgaria, he was drawn to the monastic life, and soon became a monk and a priest. He taught and ministered in Bulgaria, Czechoslovakia, Yugoslavia, and Germany, before being assigned in 1951 to teach at the Holy Trinity Seminary. He was consecrated a bishop, and after the death of Archbishop Vitaly (Maximenko) became the abbot of the monastery. As abbot, he was also the rector of Holy Trinity Seminary and was heavily involved in the formation of its curriculum and daily life. He was also praised by converts to the Orthodox faith such as Hieromonk Seraphim (Rose) for being a steadfast defender of traditional Orthodoxy. He wrote many commentaries on scripture and other works which are extensively read both in Russia and in the diaspora.

This book is printed on demand and therefore, customers who are resellers will receive a lower (short) discount on this title.