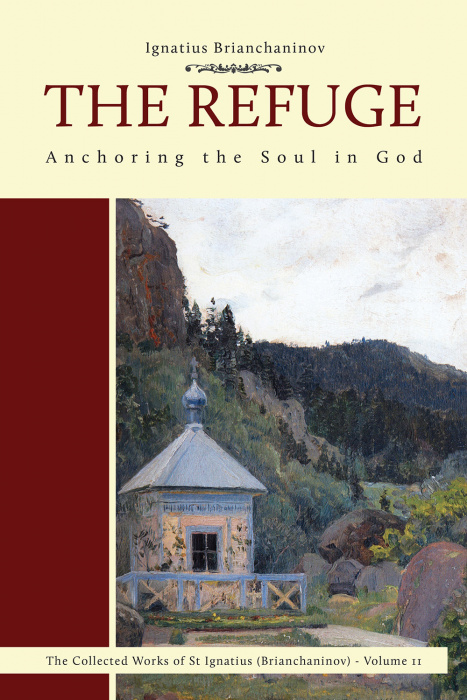 Anchoring the Soul in God

The third in an ongoing series of publications translating the complete works of Saint Ignatius (Brianchaninov) into English, The Refuge is an exposition of the concrete actions we should take if we truly desire to live with and in God. It is an active exhortation for us to reacquire the original nobility with which God fashioned us.

Anchoring the Soul in God

"Prayer is a refuge of God’s great mercy to the human race." The refuge is a place of inner stillness and peace where the heart is fully opened to the embrace of God’s love. It is a return to the ancient paradise from which the human race, in Adam, had to depart because of disobedience to the command of God. "The Refuge" is an exposition of the concrete actions we should take if we truly desire to live with and in God. It weaves together meditations on scripture (from the Psalms in particular) and amplifies these with the wisdom of early Christian saints, in particular the ascetical writings of St John of the Ladder, St Macarius the Great and St Isaac the Syrian. It is an active exhortation for us to reacquire the original nobility with which God fashioned us.

St. Ignatius Brianchaninov (1807–1867) was a prolific author of Orthodox Christian ascetical works. Published toward the end of his life, his writings continued to grow in popularity long after his death. Along with his contemporary, St. Theophan the Recluse, St. Ignatius is now considered a foremost authority on Orthodox spirituality. He was canonized by the Russian Orthodox Church in 1988. His writings have previously appeared in English as The Arena and On the Prayer of Jesus.

Nicholas Kotar is a graduate of Holy Trinity Orthodox Seminary in Jordanville, NY. He is an translator of many spiritual works in the Russian Orthodox tradition.

Blessed is the Man

Joseph: An Edifying Story taken from the Book of Genesis

The Fear of God and the Love of God

The Judgments of God

A Meeting of the Soul and the Mind

The Image and Likeness of God in Man

A Reflection on the First Epistle of the Holy Apostle Paul to Timothy, Referring Primarily to the Monastic Life

The Essential Work of a Monk

The Spirit of a Beginner’s Prayer

The Cell Rule of Prayer

The Prayer of the Mind, the Heart, and the Soul

A Mystical Interpretation of Psalm 99