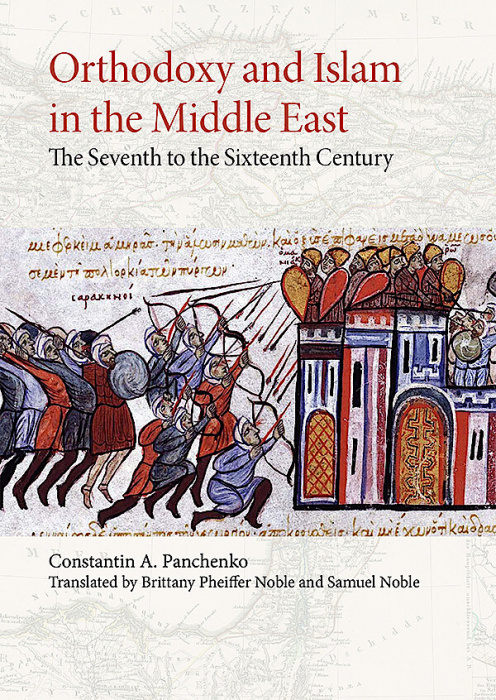 The Seventh to the Sixteenth Centuries

By Constantin A. Panchenko
Translated by Brittany Pheiffer Noble and Samuel Noble

In this short but in depth survey, Constantin Panchenko offers a nuanced portrayal that opens up fresh vistas of understanding of the VII-XVI centuries focusing on the impact that the coming of Islam had on the Orthodox Christian communities of the Middle East and in particular the interplay of their Greek cultural heritage and experience of increasing Arabization.

The Seventh to the Sixteenth Centuries

By Constantin A. Panchenko
Translated by Brittany Pheiffer Noble and Samuel Noble

Conflict or concord? The history of Islam, from its emergence in early seventh century Arabia and its explosive growth into the wider Middle East, is often portrayed as a story of the struggle with and conquest of the Christian people of Greater Syria, Palestine, and Egypt. Alternatively, the appearance of Islam is characterized as being welcomed by the conquered, whose existing monotheistic faiths of Christianity and Judaism were tolerated and even allowed to flourish under Muslim rule.

In this concise but in depth survey of the almost nine centuries that passed from the beginning of the spread of Islam up to the Ottoman Turkish conquest of Syria and Egypt beginning in 1516, Constantin Panchenko offers a more complex portrayal of this period that opens up fresh vistas of understanding, focusing on the impact that the appearance of Islam had on the many forms of Christianity they encountered, principally the Orthodox Christian communities of the Middle East. In particular he illuminates the interplay of their Greek cultural heritage with increasing Arabization over time.

This is essential reading for those who want to gain an understanding of the history of the Middle East in these centuries and of how the faith of Orthodox Christians in these lands is lived today.

Constantin A. Panchenko is an Associate Professor, Department of Middle and Near East History, Institute of Asian and African Studies, at the Lomonosov Moscow State University. He is the author of about 100 academic publications, including two monographs, collections of essays, articles and abstracts on the history of the Middle East. His major sphere of interest is the history of the Christian Arabs, particularly the Middle Eastern Greek Orthodox community in the Middle Ages and Early Modern period.

Brittany Pheiffer Noble holds an M.A. in Religion from Yale University School of Divinity and a doctorate in Russian Literature from Columbia University, New York. She is the co-translator with Samuel Noble  of Arab Orthodox under the Ottomans:1518-1831, Constantin Panchenko. Jordanville, NY: Holy Trinity Seminary Press, May, 2016. She lives in Leuven, Belgium.

Samuel Noble is a doctoral researcher at the Faculty of Theology and Religion Studies at the Louvain Centre for Eastern and Oriental Christianity at KU, Leuven in Belgium. He is the co-editor of The Orthodox Church in the Arab World: An Anthology of Sources, 700-1700 (Northern Illinois University Press,2014) and co-translator of Arab Orthodox Christians under the Ottomans: 1516-1831. (Holy Trinity Seminary Press,2016)

The Arab Conquest: Christians in the Caliphate.

The Culture of the Melkites

The First Crisis of the Christian East

Christians and the Fatimids

The Banishment of the Patriarchs

The Kingdom of Jerusalem

The Principality of Antioch

The Century of Persecution

The Second Crisis of the Christian East

The Melkites and Byzantium

The Shadow of the West

Praise for Arab Orthodox Christians Under the Ottomans, 1516-1831

"An excellent work that offers a first-rate introduction to the main themes and sources of Orthodox Christianity in the early modern period...Panchenko has written a masterful, exhaustive study of the life of Arab Orthodox Christians..." -- JOHN-PAUL A. GHOBRIAL, Department of History, Balliol College, University of Oxford.
"a must-read for all who love the Antiochian church...Knowledge brings understanding and wisdom." —James Babcock, Editor-in-Chief, SOPHIA
"... the current contribution by Constantin Panchenko deserves a wide readership." — Heleen Murre-van den Berg, Director of the Institute for Eastern Christianity, Radboud University.