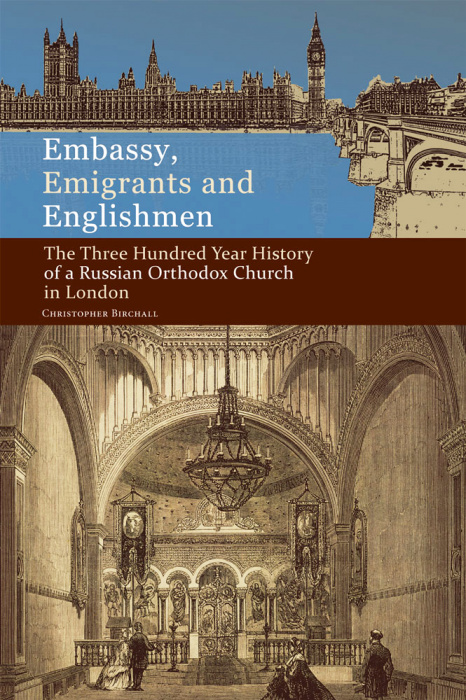 A fascinating look at the Russian Orthodox Church abroad through the lens of one imperial embassy church turned self-supporting parish. This history offers perspectives on modern English and European history from the vantage point of a little known minority community, supported by translations of primary sources not found anywhere else.

The unlikely history of a centuries old church located at the heart of one of the world’s greatest cities.
Founded in the early eighteenth century by a Greek Archbishop from Alexandria in Egypt, the church was aided by the nascent Russian Empire of Tsar Peter the Great and joined by Englishmen finding in it the Apostolic faith. It became a key centre of Orthodox Church life for Western Europe and America until the Bolshevik revolution and ultimately proved to be a haven for the many refugees of that calamity. In turn it became a spiritual home for those who escaped the upheavals following World War II or who sought economic opportunities in the West after the fall of communism in Russia. For much of this time the parish was a focal point for Anglican-Orthodox relations and Orthodox missionary endeavours from Japan to the Americas.
This is a history of the Orthodox Church in the West, of the Russian emigration to Europe, and of major world events through the prism of a particular local community. We become acquainted with the stories of an array of persons, from archbishops to members of Parliament and imperial diplomats to post-war refugees. Their lives and the constantly changing mosaic of global political and economic realities provide the background for the struggle to create and sustain the London church through time.

To read the introduction, browse the complete index, and view a selection of photographs from the book click here.

Christopher Birchall, an Englishman living in Vancouver, is a deacon in the Russian Orthodox Church. He was educated at The Royal College of St. Peter in Westminster, London, received a Bachelors of Theology from the State University of New York, and earned an M.A. in Russian Language & Literature from Norwich University in Vermont. He has previously publications include two translations from Russian: one on St Maximus the Confessor and one on confession in the Orthodox Church.

...the definitive history of Russian Orthodox presence in London…Birchall’s approach of structuring the book around the key figures of Russian religious life in London makes the book much more personal and engaging than it could have otherwise been. One could call it an iconic approach to history...Every parish should be so lucky to have such an outstanding chronicle of its memorable figures, transformations, struggles, and triumphs.

...well-researched, eminently readable and authoritative...Father Christopher’s book is a model of how such histories should be written and it is not only to be hoped that he will turn his attention to other areas of British Orthodox history but will encourage others to emulate his meticulous and scholarly work.

...a long anticipated treatise which fills a large gap in historical and ecclesiastical studies concerning the Orthodox presence and activity in the West
...both ecclesiastical and secular historians will be grateful ... for this extensive presentation.