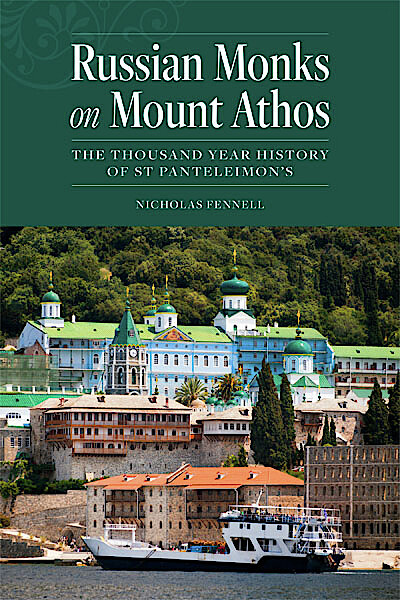 This is the first detailed history of the Russian presence on the Holy Mountain of Athos that traces it back over one thousand years. It will be invaluable to both historians and the general educated reader. The text is complemented by a timeline, glossary, comprehensive bibliography, index, full-color illustrations and photographs.

The Holy Mountain of Athos is a self-governing monastic republic on a peninsula in Northern Greece. Standing on the shores of the Aegean Sea is one of the twenty ruling monasteries that comprise the republic, that of St Panteleimon, known in Greek as the Rossikon. Its building, fully restored in recent years, can accommodate up to 5,000 men, reflecting the scale of the settlement at its apogee in the nineteenth century and prior to the Bolshevik revolution in Russia. Since the fall of the Soviet Union in 1991 the monastery has experienced a strong revival and is now among the most numerous of the twenty. But the vast buildings that can be seen today are a reflection of only the past two centuries. That the Russian presence on Athos goes back more than one thousand years is much less well known.

This book is the first comprehensive account in the English language of this millennium of history. The author has been able to draw from previously inaccessible archival materials in gathering the wealth of information he shares in this work. The history of the community is not described in geographical isolation but shown as interacting with the much wider worlds of the Byzantine and Ottoman empires and the modern nation state of Greece, together with that of the Russian homeland whose political character is constantly evolving. There are shown to be three distinct phases in this history:

Amongst the themes explored in the book are ethnic relations, the Pan-Orthodox ideal, the role of money and political pressure, sanctity and heroism in adversity, and the importance of historical memory and precedent. The author seeks to arbitrate fairly between often strongly opposing ethnic viewpoints.

It examines in detail the fluctuating fortunes of the monastic community of St Panteleimon during the past 250 years, when its ethnic identity was frequently questioned. St Panteleimon's is a history that has been blighted by Greek-Russian quarrels, mass deportation of dissenting brethren, troubles in the Caucasus, and even tangential implication in the present-day dispute between the Ecumenical and Moscow Patriarchates over Ukraine.

This text will be invaluable to both academic historians and the general educated reader who does not possess specialist knowledge. It is complemented by a timeline, glossary, comprehensive bibliography, index, full-color illustrations and photographs.

Nicholas Fennell holds a MA in Modern and Mediaeval Languages from Trinity College Cambridge, where he was a Senior Scholar, and a PhD from Southampton University. He is a member of the Friends of Mount Athos and of the Institute of the Athonite Legacy in Ukraine. The author of three previous books on Athonite Russian history, he has been researching and visiting Mount Athos since the 1980s.

1 - The Monastery’s Early History: from Xylourgou to the Old Mountain Rusik

2 - From Abbot Savvas to Abbot Gerasim

6 - The Greek and Russian Brotherhoods at Loggerheads

7 - The Reign of Archimandrite Makary

10- The Name of God Dispute