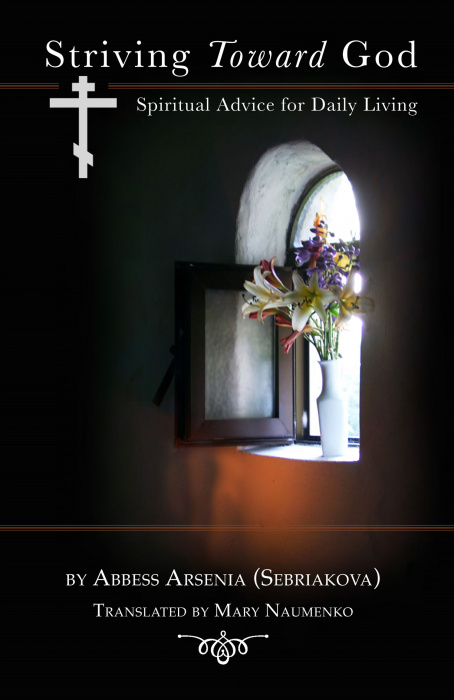 Abbess Arsenia’s counsels are steeped in Holy Scripture and in the inspiration that she draws from the services of the Orthodox Church. Throughout, she emphasizes the need to humble oneself, discern the will of God, and fulfill it through every moment of our life.

"Only when our life is wholly directed towards God do we become capable of seeing God in all and begin to do so by faith—not only in all the significant happenings of life but even in the insignificant ones—and to submit entirely to His holy will."
The 19th century saw a renaissance of Russian spirituality in the writings of St Ignatius (Brianchaninov) and St Theophan the Recluse, many of whose works have become well-known throughout the world. This book brings to an English-speaking audience the spiritual counsels of another Russian monastic of the same period. Born into a patrician family in the Don region, Anna Mikhailovna Sebriakova forsake the world at the age of seventeen and joined the Ust'-Medveditskii convent, where she was tonsured a nun with the name Arsenia. She subsequently served as abbess of this same monastery for 41 years. Heavily influenced by the writings of St ignatius, she took up correspondence with his brother P.A. Brianchaninov and became his spiritual mentor. Her letters to Peter Alexandrovich form the bulk of this book. Also offered are a selection of her personal notes and letters to other individuals. Abbess Arsenia’s counsels are steeped in Holy Scripture and in the inspiration that she draws from the services of the Orthodox Church. Throughout, she emphasizes the need to humble oneself, discern the will of God, and fulfill it through every moment of our life.

Abbess Arsenia (born Anna Mikhailovna Sebriakova) was the long-tenured superior of the Transfiuguration Monastery, serving for over 45 years in that position during the second half of the 19th century. Well known in her native Don region, she corresponded with luminaries of her time, including P.A. Brianchaninov, brother of St. Ignatius of the Caucasus. Her notes and letters are steeped in the traditions of Holy Scripture, in the inspiration of the Orthodox divine services, and in the deep current of monastic spirituality from which she drew her strength.

Mary Naumenko is the wife of an Orthodox priest and has been involved in parish ministry for several decades. She recently earned an M.A. in Arts and Humanities from Faulkner University (Montgomery, AL). Her dissertation was on the patristic concept of the nous in the writings of Dostoevsky.

Part 1 The Notes of Abbess Arsenia

Part 3 Letters to Other Individuals