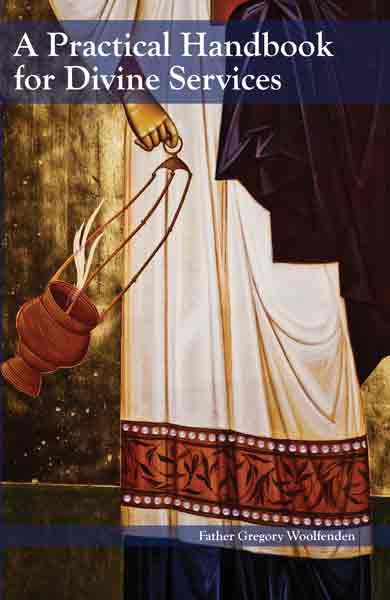 This handbook will encourage the laity who desire to enter more fully into an understanding of the Church’s Typicon, the “rule” which governs how Divine worship is offered in the church, and to internalize the principles that underpin it.
It is an invaluable guide to all who seek “to celebrate a service in splendor.”  More Information

One way in which we can increase the talents given to us by God is “to celebrate a service in splendor” and thereby “communicate the word to those untaught.” (From the Aposticha of the Matins of Great and Holy Tuesday.) A Practical Handbook for Divine Services will serve as an invaluable guide to all -- priests, deacons, servers, readers and singers --who seek to increase their God given talent in fulfilment of these words.

It will also encourage all the laity who desire to enter more fully into an understanding of the Church’s Typicon, the “rule” which governs how Divine worship is offered in the church, and to internalize the principles that underpin it. Whilst drawn from Russian sources, the texts also touch upon differences found in Greek usage. This is also a valuable resource for any student of Christian liturgy.

Igumen Gregory (Woolfenden) was born in 1946 in Liverpool, United Kingdom. Brought up in the Roman Catholic Church, he obtained degrees in philosophy and theology at the Pontifical Gregorian University in Rome and was ordained as a priest of the Roman Catholic Church in 1977. He has a masters in philosophy from the University of Manchester, United Kingdom, and a Ph.D. from Heythrop College, University of London. He lectured in liturgy and worship at Ripon College, Cuddesdon, Oxford, and was a member of the University of Oxford Faculty of Theology. In 1996 he was received into the Orthodox Church by Metropolitan Anthony (Bloom). He served as a priest in the Russian Orthodox Diocese of Sourozh (Moscow Patriarchate) and was tonsured as a monk at the Russian Orthodox Patriarchal Monastery in Turin, Italy in 2000. In the United States, he served as a priest in the Ukrainian Orthodox Church (Ecumenical Patriarchate) and was elevated to the rank of Igumen in 2007. He served the parish of the Nativity of the Mother of God in New Britain, Connecticut, and lectured at Yale Theological Seminary, New Haven, Connecticut.
His other works include: Daily Prayer in Christian Spain: A Study of the Mozarabic Office  (London: SPCK, 2000), Joyful Light (Oxford: St Stephen’s Press, 2001) and Daily Liturgical Prayer: Origins and Theology (Aldershot, U.K.: Ashgate Publishing, 2004)

Introduction vii
1. Little Vespers and the All-Night Vigil 1
2. The Third and Sixth Hours 40
3. The Divine Liturgy According to the Order of St John Chrysostom 43
4. The Liturgy of the Presanctified Gifts 88
Appendix 1 Vestment Colors 99
Appendix 2 A Complete Collection of Canon Responses 103
Appendix 3 Notes for Concelebration by Priests in the Absence of a Bishop 107
Notes 114
Index 142﻿